The word Kata means "shape" or "form".  The kanji for Kata  型 is composed of the following characters:

A kata is a sequence of blocks, kicks and punches from one or more stances, involving movement forward, backward and to the sides.  The number of movements and their sequence are very specific.  The balance between offensive and defensive techniques, the stances used and the direction and flow of movement all serve to give each kata its distinctive character.

Through the practice of kata, the traditional techniques used for fighting are learned.  Balance, coordination, breathing and concentration are also developed.  Done properly, kata are an excellent physical exercise and a very effective form of total mind and body conditioning.  Kata embodies the idea of Renma 錬磨, or "polishing" – with diligent practice, the moves of the kata become further refined and perfected.  The attention to detail that is necessary to perfect a kata cultivates self discipline.

Through concentration, dedication and practice, a higher level of learning may be achieved, where the kata is so ingrained in the subconscious mind that no conscious attention is needed.  This is what the Zen masters call Mushin 無心, or "no mind." The conscious, rational thought practice is not used at all – what was once memorized is now spontaneous.

Mas Oyama said that one should "think of karate as a language – the Kihon 基本 (basics) can be thought of as the letters of the alphabet, the Kata 型 (forms) will be the equivalent of words and sentences, and the Kumite 組手 (fighting) will be analogous to conversations."  He believed that it was better to master just one kata than to only half-learn many.

技の緩急  Waza no Kankyū   The Relative Tempo of Techniques:
The tempo of the kata varies – some techniques are performed quickly, while others are done more slowly.

力の強弱  Chikara no Kyōjaku   The Relative Force of Power:
The power of a technique derives from the proper balance between strength and relaxation.

息の調整  Iki no Chōsei   The Control of Breathing:
The correct timing (inhaling and exhaling) and force of the breaths (Kiai 気合,Ibuki 息吹 or Nogare 逃れ) are essential for proper techniques.

The practice of traditional kata is also a way for the karateka to pay respect to the origins and history of Kyokushin Karate and the martial arts in general.

OriginsKyokushin kata are often categorized as "Northern Kata" or "Southern Kata," based upon the origin and development of the kata and the style of its techniques.

The Northern Kata are similar to those found in Shōtōkan 松濤館流, since they were developed from Mas Oyama's training under Gichin Funakoshi.  Master Funakoshi derived the kata from the Shurite 首里手 system of Okinawan karate, which originated from northern Chinese kempo (Shaolin).  The Northern kata generally involve longer movements and a greater fighting distance between opponents (Maai 間合い), based on the broad, open terrain of northern China.  Techniques are generally longer and straighter than those of the Southern kata.  The Northern Kata include:

The Southern Kata are similar to those found in Gōjū Ryū 剛柔流, since they were developed from Mas Oyama's training under Nei-Chu So.  Master So was the top student of Gogen Yamaguchi, the top Goju practitioner in Japan.  Chojun Miyagi developed Goju Ryu from the Nahate 那覇手 system of Okinawan karate, which originated from southern Chinese kempo.  The Southern kata generally involve shorter movements and a closer fighting distance between opponents (Maai 間合い), based on the slippery, wet terrain of southern China.  Techniques are generally tighter and more circular than those of the Northern kata.  The Southern Kata include:

Pinan (Heian in Japanese) is the Okinawan pronunciation of the characters Hei 平, meaning peace, and An 安, meaning relax.  Though the physical moves of kata involve techniques used for fighting, the purpose of kata is to develop a calm, peaceful mind and harmony between the mind and body.

Sanchin literally means "three battles" or "three conflicts", from the characters San 三 (three) and Chin 戦 (war, battle or match).  It is the principal kata in certain Okinawan karate styles, such as Goju Ryu and Uechi Ryu, and it is likely one of the oldest kata.  Certain legends attribute the creation of Sanchin to Bodhidharma in the early sixth century.  Sanchin kata seeks to develop three elements at the same time:
– The mind, body and the techniques,
– The internal organs, circulation and the nervous system, and
– The three Ki 気, located in:
– the crown of the head (Nōten 脳天),
– the diaphragm (Hara 腹), and
– the lower abdomen (Tanden 丹田).
Sanchin is an isometric kata where each move is performed in a state of complete tension, accompanied by powerful, deep breathing (Ibuki 息吹) that originates in the lower abdomen (Tanden 丹田).  The practice of Sanchin not only leads to the strengthening of the body, but to the development of the inner power (Ki 気) and the coordination of mind and body.

Gekisai means conquer and occupy.  The name is derived from the charactersGeki 撃, meaning defeat or conquer, and Sai 塞, meaning fortress or stronghold (literally translated as "closed", "shut" or "covered").  The wordGekisai can also mean demolish, destroy or pulverize.  The katas teach strength through fluidity of motion, mobility and the utilization of various techniques.  Flexibility of attack and response will always be superior to rigid and inflexible strength.  (Dai 大 and Shō 小 mean "larger" and "smaller", respectively.)

Yansu is derived from the characters Yan 安, meaning safe, and Su 三, meaning three.  The name is attributed to that of a Chinese military attaché to Okinawa in the 19th Century.  The word Yansu also means to keep pure, striving to maintain the purity of principles and ideals rather than compromising for expediency.

Tsuki no Kata by its very name is kata of punches (Tsuki 突き), and there is only one kick and just a few blocks in the entire form.  The word Tsuki can also mean fortune and luck.  Good fortune and luck does not come by waiting.  For every punch in this kata, envision that a personal barrier is being broken down.  Strong, persistent effort directed at problems will bring good fortune.

Tensho means rolling or fluid hand, literally translated as "revolving palms", from the characters Ten 転 (revolve) and Shō 掌 (palm of hand).  Tensho is the soft and circular (Yin 陰) counterpart to the hard and linear (Yang 陽) Sanchin kata.  Not only was Tensho one of Mas Oyama's favorite kata, he considered it to be the most indispensable of the advanced kata:

Tensho is a basic illustration of the definition of Karate, derived from Chinese kempo, as a technique of circles based on points.

Tensho should be a prime object of practice because, as a psychological and theoretical support behind karate training and as a central element in basic karate formal exercises, it has permeated the techniques, the blocks and the thrusts, and is intimately connected with the very life of karate.

A man who has practiced Tensho kata a number of thousands of times and has a firm grasp of its theory can not only take any attack, but can also turn the advantage in any attack, and will always be able to defend himself perfectly.

Saiha means extreme destruction, smashing or tearing, from the characters Sai 最, meaning utmost, and Ha 破, meaning rip, tear or destroy.  The wordSaiha can also mean great wave, the source of the IFK logo.  No matter how large a problem is encountered, with patience, determination and perseverance (Osu) one can rise above and overcome it, or smash through and get beyond it.

Kanku means sky gazing, from the characters Kan 観 (view) and Kū 空 (sky or void) (the same character as Kara in Karate).  The first move of the kata is the formation of an opening with the hands above the head, through which one gazes at the universe and rising sun.  The significance is that no matter what problems are faced, each day is new and the universe is waiting.  Nothing is so terrible that it affects the basic reality of existence.

Seienchin means conqueror and subdue over a distance, or attack the rebellious outpost. from the characters Sei 征, meaning subjugate or attack the rebellious, En 遠, meaning distant, and Chin 鎮, meaning tranquilize.  In feudal Japan, Samurai warriors would often go on expeditions lasting many months, and they needed to maintain their strength and spirit over a long period of time.  This kata is long and slow, with many techniques performed from Kiba Dachi 騎馬立ち (horseback stance).  The legs usually become very tired in this kata, and a strong spirit is needed to persevere, instead of giving up.  The word Seienchin can also mean to pull in battle.

Garyu means reclining dragon, from the characters Ga 臥 (lie prostrate) and Ryū 竜 (dragon).  In Japanese philosophy, a great man who remains in obscurity is called a Garyu.  A dragon is all-powerful, but a reclining dragon chooses not to display his power until it is needed.  Likewise, a true karatekadoes not brag about or show off his abilities.  He never forgets the true virtue of humility.

十八  Seipai
Seipai is the Okinawan pronunciation of the kanji characters for 18 (pronounced Jū 十 Hachi 八 in Japanese).  In other karate styles, this kata is sometimes called Seipaite, or eighteen hands.  The number 18 is derived from the Buddhist concept of 6 x 3, where six represents color, voice, taste, smell, touch and justice and three represents good, bad and peace. 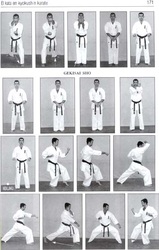 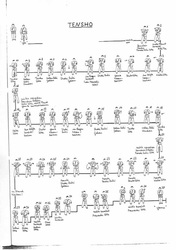